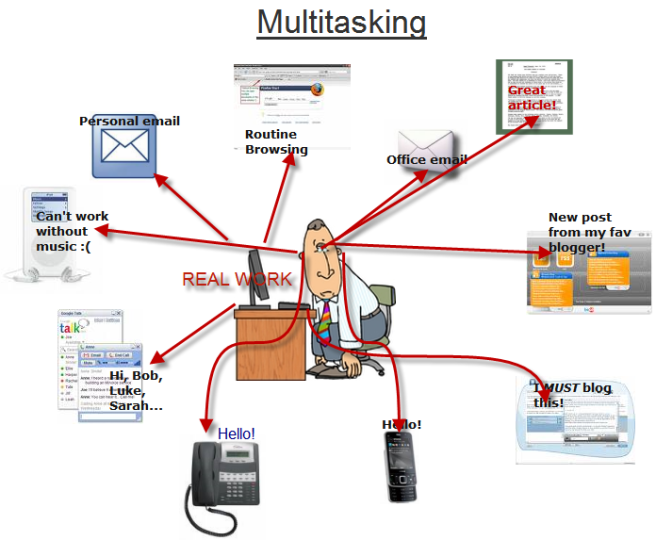 Multitasking messes with the brain in several ways.

At the most basic level, the mental balancing acts that it requires energize regions of the brain that specialize in visual processing and physical coordination and simultaneously appear to shortchange some of the higher areas related to memory and learning. We concentrate on the act of concentration at the expense of whatever it is that we are supposed to be concentrating on.

Another negative effect of multitasking is that such a practice boosts your level of stress-related hormones such as cortisol and adrenaline and wears down your immune and physiological systems through biochemical friction. In the short run, confusion, fatigue, and chaos merely hamper our ability to focus and analyze, but in the long term, such a repeated practice of multitasking will result in atrophy of the brain and cause premature aging.

On a more mundane note, multitasking is the reason why you get less done in a day than you would like or like to think you do. You go from one task to the other, without completing one; you go from answering emails to phone calls, to tinkering with your computers and nothing is getting done. You are merely procrastinating and complaining that the days are too short or not getting paid enough for all what you have to do.

What was I saying about multitasking creating chaos!

One thought on “Multitasking or the art of looking stupid”