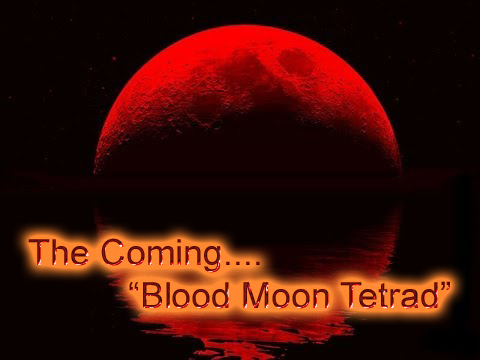 Beware of the false prophets!
The final countdown | by: Michel Ouellette JMD

First, what is a Lunar Tetrad?

The Japanese Tendo Sect is predicting the “End of the World” to happen any time between today and June 2014.

Two Christians pastors, Mark Blitz and John Hagee are predicting the “Second Coming of Christ” to happen around the same date and, the “Last Judgment Day to happen somewhere in 2015.

For the year 2014-2015, NASA and astronomers are predicting a natural recurring natural astrological phenomenon: a Lunar Tetrad…

The “Blood Moon” of John Hagee

In astronomy, all the full moons have names that will typically coincide with the months or seasons of the year and one of the most famous names for the moon is the “Hunter’s Moon”, the full moon immediately following the “Harvest Moon”.

People from the Northern Hemisphere of the world who, soon after sunset have the opportunity to observe this autumn full or near full moon rising often referred to the “Hunter’s Moon” as the “Blood Moon” because of her early morning brownish and reddish colors that could not be seen when observing the moon overhead.

The apocalyptic heresy of Blitz and Hagee

Two Christian pastors, Mark Blitz and John Hagee, use the term “Blood Moon” to apply to the full moons of the upcoming lunar Tetrad of 2014-2015. Mark Blitz and John Hagee speak of the upcoming lunar Tetrad as representing a fulfillment of this alleged Biblical prophecy: “The sun will be turned to darkness, and the moon to blood before the great and dreadful day of the LORD comes.” – Joel 2:31

According to our now famous and infamous lunatics, April 2014 will be a decisive time for mankind. The year 2014-205 will mark both historical and biblical events: the “Second Coming” of Christ and the “Judgment Day”. There will be apocalyptic events such as described by Daniel and John, the notorious biblical writers.

The syncretic belief of Japanese Tendo

Three prophets that will be proven wrong once again

According to the American pastors Blitz and Hagee, April 15th 2014 will not mark the “End of the World”, but the return Jesus-Christ on earth. Still according to Blitz and Hagee, on October 8, 2014 as well as on April 4 and September 28, 2015, there will be further signs to be observed in the sky [Blood moons] as testimony for the Last Judgment Day and the End of the World.

My guess is that the Tendo Sect members and their leader Kazunori Nagamatsu Touken were not fluent enough in English to fully read or understand the content of the bestseller book written by Hagee in 2013.

Whatever, Let’s pray the Lord and ask the “Happy Bunch” for their benediction.

Michel Ouellette JMD is a talented keynote and motivational speaker, public affairs & communications Strategist. For more about “Making It” in the years to come and coming soon: “Standing Out” by JMD.

This Blog appears once a week, every Friday with some occasional extra posts once in a while. Click on the “Following” button to get every new posting as soon as its goes live.

All actualities supporting our propos can be found on our Journal Edition of The Futurist Daily News.

One thought on “The Latest Apocalyptic Prophecy”