Only two possible verdicts in the Derek Chauvin’s trial: “Mistrial” or “Second-degree Murder”. Whatever the outcome, Derek Chauvin’s fate will become a catalyst for right-wing and left-wing extremist-group violence.

As Chauvin’s murder trial for the death of George Floyd continues in Minneapolis, anarchists and white supremacists are already attempting to exploit activities and events surrounding the legal proceeding. White supremacists are already saying online that the Chauvin trial could lead to a race war and “black separatist groups” may target law enforcement officers or government property if Chauvin is acquitted, if there is a mistrial, or if a potential sentencing is seen as too lenient.

Chauvin is most certainly guilty of “culpable negligence whereby the person creates an unreasonable risk, and consciously takes chances of causing death or great bodily harm to another.” If convicted of second-degree manslaughter, Chauvin is looking at a possible sentence to imprisonment for not more than ten years or to payment of a fine of not more than $20,000, or both.

If acquitted, something that is very unlikely, expect the worse.

Now that this circus, that royal farce that was the Trump’s impeachment is over, it will be up to Biden to “Try” to make America Great Again. Good luck!

The Trump’s impeachment TV Reality Show is finally over and there is nothing new that was revealed about Trump.

From day one of his announcement that he was to run for presidency of the United States, everyone with a minimum common sense and intelligence knew that he was nothing else, nothing more than an egomaniac egocentric misogynistic narcissist and … con artist, something that he did prove and demonstrate day after day during his presidency. And still, 75 million Americans voted for him in the presidential election of 2020.

America, you had it coming

Now that he turpitude of the American nation has been exposed, let’s turn the page and discuss more munificent avenues. Again, good luck to you Mr. Biden in trying to restore some kind of credibility for the United States of America and its political institutions.

Like for Trump, the days of “Greatness” for America are over. 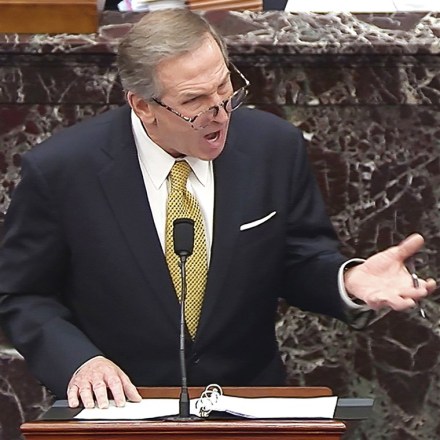 AN AMBULANCE CHASER and JACK OF ALL TRADE: The endlessly pedantic and pathetic Michael van der Veen.

An ambulance chaser and jack of all trades after suing Trump in August 20020, Michael van der Veen is now representing Trump in his Senate impeachment trial.

Under his belt, a suit against a toy manufacturer, a case of corporate embezzlement, a suit seeking to legalize the use of clean hypodermic needles to combat the spread of HIV/AIDS and police brutality claims. He has also represented criminal defendants accused of rape, drunk driving, and murder. He also represented a man who claimed to have been served a fried rat at a Kentucky Fried Chicken restaurant.

More astonishing, notwithstanding that he is now pretending that Trump did nothing wrong in relation with the Capitol riot of January 6, in August 2020, Van der Veen sued the then President Donald J. Trump alleging that his attacks on the U.S. Postal Service were unsupported by evidence. In his suit against Trump, van der Veen was alleging: “These actions . . . arise in an environment subject to repeated claims by President Donald J. Trump that voting by mail is ripe with fraud, despite having no evidence in support of these claims, and lawsuits filed by the Trump campaign to stop mail-in voting in states such as Nevada and Pennsylvania.” The suit was settled in late November 2020.

While there is no prohibition against a lawyer representing a former adversary, van der Veen now representing Trump only demonstrate how difficult it is now for the ex-president to find reputable lawyers and law firms to represent himself and his interests. The endlessly pedantic Michael van der Veen is best known in Philly for his radio ads, asking if you’ve tripped or having been bite by a dog while walking down the street.

Trump will be acquitted again: Forget Impeachment, use the section 3 of the 14th Amendment.

Again, thanks to these Yellow Unscrupulous Republican Representatives, like for the first impeachment trial, there will be no conviction: Trump will be acquitted again.

The suggestion that the Senate will censure Trump for aiding and abetting the January 6, 2021 insurrection falls far short of what is required to see justice done.

What is required is keeping Trump from having access to high office ever again, disqualifying this dangerous and scheming individual for the 2024 presidential election and, and Section 3 of the 14th Amendment provides that remedy.