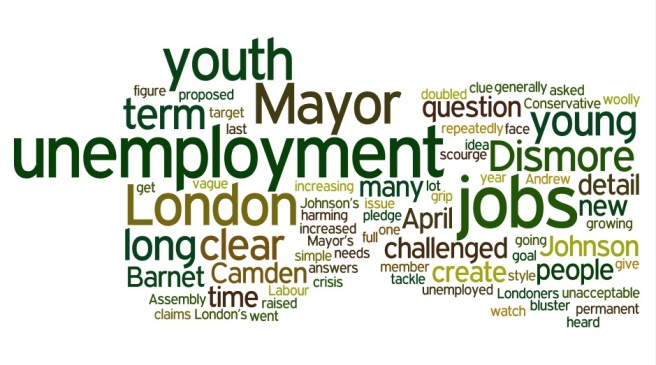 Unemployed: “A person without any kind of willpower, lacking proper training, proper education, without extraordinary physical or technical ability and absolutely no exceptional social skills.”

According to the United Nations’ Labor Agency, with new job opportunities not growing fast enough to absorb a growing global workforce, the number of unemployed people around the world reached an estimated 201.8 million people in 2013, a number that is most likely to increase by another 4.2 million in 2014.

In the years to come, labor may soon enough give way to frank unemployment. Everywhere in the world, we can already see such a long-term trend towards joblessness profiling at the horizon. There are definite indications that exactly like for manual and physical jobs that have been eradicated by technical advances, more and more regulated occupational jobs such as accountancy, legal work, technical writing are now at risk of being automated. This is more worrying than many economists; politicians and scholars are prepared to admit.

For whoever does not have the proper skills, to meet the demand and the curriculum of the jobs of the future, there is not much hope. For anyone who wants to make it tomorrow, it is now time to start surfing on the wave, to take a quantum leap toward the next one and to prepare for the unexpected.

And … whatever you decide to do, just make sure to know the right people.

Michel Ouellette JMD is a talented keynote and motivational speaker, public affairs & communications Strategist. For more about “Making It” in the years to come and coming soon: “Standing Out” by JMD.
Order Now

Please note that this Blog appears every Sunday and Wednesday, with some occasional extra posts like today. Click on the “Following” button to get every new posting as soon as its goes live.

For the next six years to come, The Futurist Daily News expects more unrest in the religious, economical and political world especially in the Middle East and Africa. Notwithstanding the opinion of many, the so-called « Arab Spring » is far from over. The social « Awakening » of the Arabic has forced the Arab world to change, mainly for the better, nevertheless the opinions of too many and despite the massive recent disappointments of Syria and. For the next six years to come, the uncertainties of a changing world will continue to shake the autocracies of Africa and the Arabian Gulf. Social media and the Internet have revolutionised Arab minds. The ability of the crowds in Cairo’s Tahrir Square to bring down both a military government and-with help from the generals-an Islamist one has given people a new thirst for having a say in who rules them.

The Futurist Daily News expects more unrest in the workplace around the world. Unemployment will be on the rise worldwide, particularly among the younger generation. According to the 2013 International Labour Organisation (ILO) report, as of 2012, nearly 200 million people out of the global working-age population of 5.3 billion are were jobless. This number will dramatically increase in the years to come and further increase the disparity between the riches and the poor. The middle class is now in jeopardy and, for the years to come will be even further economically exploited.

In this worldwide struggle of the persecuted, the poor and the exploited for justice, equity and prosperity, The Futurist Daily News expects the rise and spread of more and evermore misinformation in the medias especially on the Internet. While expecting more and more people attempting and trying to combat and reverse these trends, The Futurist daily News predicts that it may well be, if not a losing battle, a daily uphill battle for survival of the strongest and the fittest. Only those who will genuinely and truly understand the real challenge of the years to come will thrive and prosper. Those who don’t will be mere survivors.

Most of these societal disasters of today have one thing in common: the tolerance of the people and his utopian faith in the spiritual and religious.

Please note that this Blog appears every Sunday and Wednesday, with some occasional extra posts like today. Click on the “Following” button to get every new posting as soon as its goes live. 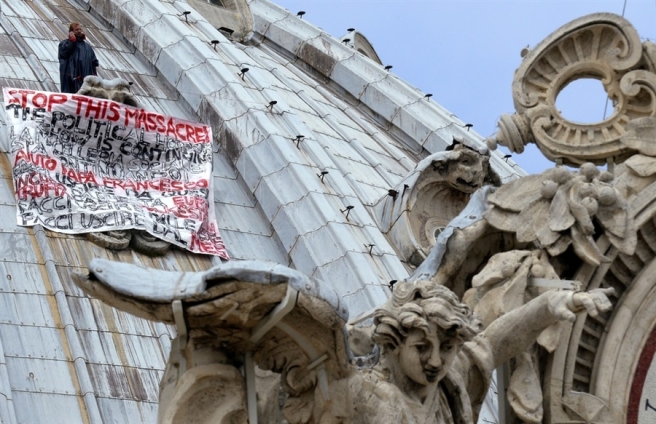 ROME  – May 20, 2013, a man climb onto a ledge of the St-Peter’s Basilica to protest against austerity measures.

May 2o 2013, Marcello Di Finizio climbs onto a ledge on the dome of St Peter’s Basilica and unfurls a banner protesting against a “political horror show,” an apparent reference to Italy’s embattled coalition struggling with recession and high unemployment.

Italy is stuck in its longest recession since quarterly records began in 1970, and jobless rates are close to record highs.

In North America, more and more municipalities are cracking down on the homeless by adopting more and more stringent bylaws and regulations prohibiting begging, loitering, and sleeping outside.

On any given night, about 636,000 Americans and 300,000 Canadians are homeless. While these numbers have declined over the past few years, they will soon rise again. Recent evidence suggests that the effects of the economic downturn on the homeless are intensifying.

For these individuals, begging, loitering and sleeping outside is not a choice, it is a necessity.

Blame the economy, not the victims.

CAIRO – Egyptian activists vowed to flood Tahrir Square and cripple the country with a strike this weekend, saying that one year after forcing a dictator from power their revolution is far from complete.

Egypt’s economy has suffered since Hosni Mubarak’s ouster: Foreign investment has dried up and tourists are staying away. The once-banned Muslim Brotherhood which won almost half of the seats in parliament in recent elections promised to improve things by ending corruption, but little has changed.

“President Mubarak was very bad,” says taxi driver Redah Mohamed Abdella, 47, a father of four whose daily pay dropped from $25 before the revolution to $5 now.

While Egypt’s new political elite, the Muslim Brotherhood’s Freedom and Justice Party cooperate with the country’s ruling military council, and revolutionaries plot disruption, “Ordinary Egyptians like me are suffering”.

“Everyone has an eye on power,” he says.

ATHENS—Clashes broke out in central Athens Friday as Greece’s major unions launched a 48-hour nationwide strike to protest new austerity measures demanded by the country’s creditors, adding to social tension in a country now in its fifth year of economic recession.

Hundreds of hooded youths in the main Syntagma Square in Athens attacked riot police with gasoline bombs and other projectiles, smashing objects in and around the square.

Police fired tear gas and staged running charges to scatter the youths. At least one person was detained.

With the world still shaking from the global economic earthquake, and suffering daily aftershocks, it is not surprising to find more and more people asking themselves whether capitalism is dead. Today we are back to the inequality of 1929 and the Great Depression. High unemployment and the failure of wages to keep pace with living costs are resulting in widespread unrest against elites. For many and especially young people, the business community has lost its moral compass.

There is no doubt in my mind that capitalism is outdated and that today, talent, not capital, should be the main driver of economies. So far there seems to be a worldwide view that capitalism may be the worst form of economy and saying that the system needs fixing is only the starting point. Some believe that a new model based around a triangle of government, companies and society is the way forward. Some others believe that there has to be a more inclusive form of capitalism. The real problem is still that far too many narrow-minded executives that don’t want to make the necessary fundamental changes that are necessary to make capitalism work.

While the shift in economic power to the East is undeniable, no-one should think these emerging markets are great paragons of new model capitalism, spreading wealth and benefits. It’s all lip service unless major action is implemented. There may well be a rising middle class in the Eastern economies, but poverty, disease and a lack of social welfare still abound there, that is without saying anything about corruption, and lack of corporate transparency.

Can someone out there please tell me what the new model of global economy should be, how it might look like and most importantly, how we can prevent it to become a re-fashioned version of our actual, outdated and corrupted economic models?